The Yakima Fire Department began as a volunteer organization in the early 1880’s when buildings were being moved from the present site of Union Gap to the location which was to become North Yakima. It was first organized simply as a bucket brigade. However, the growth of the community led to a study and considerable work on the part of the three Simmons brothers. (Their first names are unknown, but a ” J. Simmons” is listed as a member of the department). This resulted in the organization in 1886 of the North Yakima Volunteer Fire Department. This department ran a small steam engine, a hook and ladder rig and a hose cart manned by a full complement of 20 men.

In 1889 the city commission passed what was known as “Ordinance 99” which reorganized the department and established formal rules and regulations. F.E. 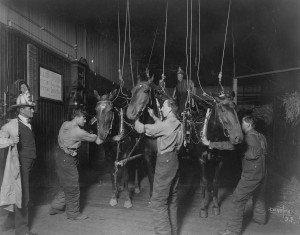 Rowe was Yakima’s first Fire Chief. Membership in the department was, while limited in number, not at all difficult of requirement. A man had to be “18 years of age, an American citizen, and be able to converse ‘understandingly’ in English.

Through the years the record shows that the department gave a veritable series of balls, dances, celebrations and other social functions, all aimed at raising money for the department. The department’s early history is one of financial crisis and of neglect by the city commission. The first dance recorded in the department minutes was held on Saint Valentine’s Day, 1890. After disbursements, the department realized $46.50, and the whole affair was considered highly successful.

In September, 1890, Will R. White was elected Chief, but for some reason, served only a month before the chair was assumed by John Reed. In May of that same year , a painter named Charles M. Hauser was accepted for membership in the department. Eight years later he was to become Chief of the Department and eventually was Yakima’s first paid chief.

In March, 1891, an entry describes the uniforms of Hose Company 1. These uniforms were purchased for parades, dances and other ‘fancy occasions’. The shirt was red with wine cuffs and collar. A wide black patent leather belt completed the uniform. Although a description is not given, the uniform caps of the day are seen as one with a visor and a low bell crown. The department did not at the time wear badges. A running suit was also provided for more strenuous activities such as hose competition and races. This running suit closely resembled an old fashioned union suit with buttons up the front and no collar. Trousers to be worn with the uniform were at the option of the wearer. Some members of the department are shown wearing a woven cloth belt with a large clasp similar to the type used as boxing belts in those days.

A succession of chiefs directed the department until Hauser was elected Chief in 1898. Tom Redman was chief from June, 1893 till January, 1894; Ed Farmer January 1894 until June of the same year; John Reed was elected chief again in June of 1894 and served until May 13, 1897, except for a period of May and June in 1896 when a small group of members attending the election meeting placed J.J. Backer in the chair. In May of 1897 Ed Farmer was elected chief and served until Hauser’s election in 1898. Some of the names found in the old roll call pages of the North Yakima Fire Department have a connection to the history of the area.

Because of a lack of concern and lack of support by the city commission, the members of the department voted on March 28, 1904 to resign in a body unless the city commission pledged further support and recognition. Neither materialized, so on May 3, two days before the threatened walkout, the last meeting of the North Yakima Volunteer Fire Department was held. A dinner, which cost $35 was given for the membership and the funds of the department were divided among the active members. Each man received $19.35.

The city commission tried desperately, but too late, to give North Yakima fire protection through a reorganized department of volunteers. This group, however, lacked direction and was in operation only a little over a year. Then, on September 14, 1905, the North Yakima Fire Department made its first run. With Charles Hauser as Chief, this department included five paid men and ten volunteers. Quarters were on Front Street in what was later to become the city hall.

On May 5, 1906, at 10:12 P.M., just ten months after the reorganization was made, the largest fire in the history of young North Yakima occurred. The fire involved 14 buildings, and firemen blamed poor water pressure and “a lack of saws” as factors contributing to the devastation.

The paper of the day records that “skeleton walls, smoldering embers and twisted iron marks the spot where five of the biggest warehouses in the city and the Northern Pacific depot stood.” Destroyed completely were the depot, Coffin Brothers warehouse, the J. M. Perry Company, and the Yakima Hardware warehouse.